After Snow White and Romeo and Juliet, Angelin Preljocaj is returning to story ballet and his taste for stories. Combining Tchaikovsky’s musical masterpiece with more contemporary arrangements as he likes to do, he takes possession of the myth of the swan-dancer. A work begun in 2018 with Ghost, in which he paid tribute to Marius Petipa, projecting himself into the choreograp her’s imagination at the same moment as the idea of his Swan Lake occurred to him.

Garlanded with yellow pears
And full of wild roses
The land leans into the lake,
And you, lovely swans
Drunk on kisses
Plunge your heads
In the pure and sacred water.

Odette is a young woman who is preoccupied with environmental matters. One night, as she is strolling along the shore of Swan Lake, she encounters Rothbart, a corrupt businessman and evil sorcerer. He is looking for ways to exploit a fossil fuel deposit he just discovered near the lake. Fearing that the young woman might thwart his plans, he uses his powers to turn her into a swan.

Meanwhile, at the headquarters of a drilling rig sales company, the CEO and his wife are unveiling the model of a new plant. During the party, Siegfried, the son of the CEO, finds out that the new plant will be built on the lake’s shore. His love for nature urges him to veto the project and to oppose his father, despite being heir to the company’s presidency. That same night, he goes to the lake to investigate. There, he meets the strange and fascinating swan maiden and follows her along the shore. But he is soon stopped by Rothbart and his men, who take him for an opponent. They knock him unconscious at the water’s edge and leave him there. After a ballet of swansalights on the lake, one of them approaches Siegfried. As the young man regains consciousness, he sees the swan maiden he met earlier, Odette, standing before him and falls madly in love with her.

After signing a secret agreement with Rothbart to sell the plant and have it built near the lake, Siegfried’s father throws a party and invites Rothbart and his daughter, Odile. She is Odette’s evil twin and Siegfried’s father wants her to seduce his son. Deceived by Odile’s resemblance with Odette, Siegfried informs the guests that he is going to marry her. Rothbart agrees, under the condition that he acquires the plant. Blinded by love, Siegfried accepts the condition. But when the real Odette appears, he understands his mistake and becomes overwhelmed with excruciating pain. He goes to his mother to relieve his suffering, but to no avail. Siegfried returns to the lake to see Odette again, but the fate he brought upon himself is already in motion.

Angelin Preljocaj
about his Swan Lake

— As a modern choreographer, what does Swan Lake mean to you?

— To me, it’s an Everest, it’s one of the greatest creations ever. It’s already a challenge to take on such a masterpiece, and it’s even more of a challenge to do it in the midst of the COVID pandemic.There are a lot of unexpected setbacks, which makes it even more stressful than it already is.

— What did you keep from the original ballet by Marius Petipa and Lev Ivanov, with music by Pyotr Ilyich Tchaikovsky?

— I kept the original love story and the bewitching tale of a young woman being turned into a swan. The most important change that I made is about the role of the parents. In most versions of Swan Lake, they are rather transparent. They don’t dance much and they play very banal parts. In my version, they become very important. They dance often because they influence the relations of the protagonists. Siegfried’s father is a tyrant who abuses of his power. His mother is rather protective, she is a bit reminiscent of a Proustian figure. And it’s funny to remember that In Search of Lost Time tells the story of Swan and his mistress Odette! I suppose Proust was fond of Swan Lake. I also kept Rothbart’s character and made it a very ambiguous one. He is a sorcerer who uses magic when he needs it, but he has other social functions. He represents the businessmen and industrialists whose activities can be very detrimental to our societies. Siegfried’s father has a similar profile, but he is not a sorcerer. And it seems like there is some sort of scheme going on between these two characters.

— Do you see a form of commoditisation of bodies in this story? Because in a way, Rothbart is already using his daughter to pernicious purposes in the original scenario.

— Exactly! In reality, Siegfried’s father and Rothbart agree to marry their children in order to grow their own fortunes.

— “The best way to pay homage to Marius Petipa is probably to reunite with his creative process and reinvent things.” Did you keep Tchaikovsky’s score?

— In my version of the Lake, 90% of the score is from Tchaikovsky, with 90% of those 90% coming from Swan Lake and the other 10% coming from some of his other works. The original score is three hours long so I didn’t keep it in its entirety. And since I want my version to tell things that are not in the original scenario, I looked for other pieces in his body of work, which led me to rediscover Tchaikovsky. I explored his symphonies, his orchestral compositions. The musical foundation of the score remains the Lake, with the addition of extracts from violin concertos, overtures or symphonies.

— Are there elements from Petipa and Ivanov’s choreography?

— I thought it would be interesting to lean on some of its choreographic traits, like a palimpsest. As if I arrived at an oppidum and built a new city on these ancient foundations. There are some parts that I had a lot of fun with, such as the White Act. These are demonstrative moments that are truly exhilarating and that I kept in the form of small numbers in order to recreate them. The truth is that the choreography is not after Marius Petipa, because I rewrote it entirely. It’s not a structural and fundamental rearrangement, it’s an original choreography. The best way to pay homage to Marius Petipa is probably to reunite with his creative process and reinvent things.

— Will Odette and Odile, the white swan and the black swan, be interpreted by a single dancer, as it is currently the case in the classical version?

— As of now, yes. But it’s a difficult role that requires opposing qualities in terms of virtuosity and interpretation. It also requires an intense preparation in order to find the right balance in both characters and to meet the expected standards of quality. If it doesn’t work, I will turn to a twodancer arrangement. Having two different women on stage is also a good way of giving its full power to this tale.

“Angelin Preljocaj manages to create a popular show without renouncing artistic standards. Carried by a troupe of powerful dancers who are literally devouring the stage, he successfully climbs on top of the magic mountain that is Swan Lake.”
Danses avec la plume, October 12th 2020

“Angelin Preljocaj returns to an ominous tale where love is neither triumphant nor victorious. His writing is rich and abundant, drawing from neoclassicism as well as electro pop (…). Angelin Preljocaj treats each movement with his usual finesse, breathing life into each scene of the ballet. (…)
A melancholic dream which elegance and breathtaking moments make for a moving experience.”
L’oeil d’Olivier, October 29th 2020

“The choreographer achieves the feat of rewriting Swan Lake in its entirety while paying homage to Bourmeister’s choreography through multiple references. (…) It’s a different story set in a different world and the result is absolutely delightful. The movements of the dancers are of an exceptional quality and the visual effects are well executed, with lights shaping each choreographic space. Angelin Preljocaj playfully transgresses established codes but never loses his footing, giving us a highly enjoyable Lake.”
Le Figaro Magazine, October 30th/31st 2020

“Angelin Preljocaj’s take on Swan Lake is a moment of pure beauty.
The choreographer gives us a serene outlook on what choreographic modernity can be to someone who is greatly attached to the history of dance. Preljocaj keeps Petipa’s original framework and recreates the Lake from within.
(…) Mirroring the environmental focus of this tale, bodies become the extension of the world that birthed them. As the ballet comes to an end, we are presented with a pantheist vision where the swans and the lake and men and nature all form but one ecosystem, threatened by a speculative fever.
(…) Nureyev’s Lake was a long dream expressing inner torment. But in 2020, Preljocaj’s Lake is the reflection of a collapsing world, our world, in all its speculative madness.”
Transfuge, November 2020 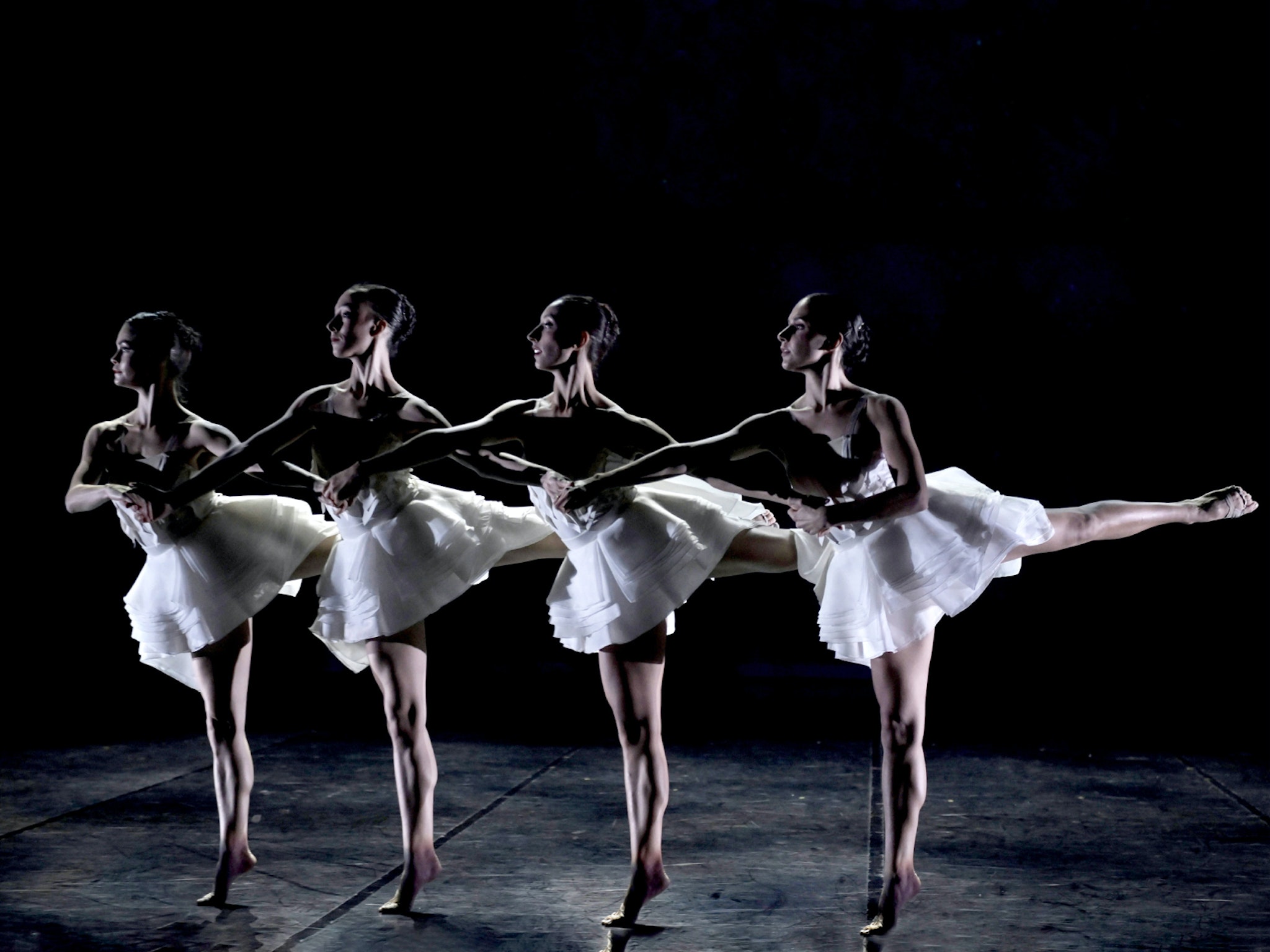